CrowdStrike Racing | June 15, 2020
With most professional sports currently on pause, leagues and fans alike know that there is no substitute for the physical interaction between participants. However, there is a notable exception: professional motorsport. Esport racers use game controls that closely simulate the controls in an actual car. In fact, professional race car drivers have been playing simulated racing for years to learn the tracks on which they compete.The close connection between real and virtual motorsports presented a unique opportunity to provide events for fans eager to see a car race. Amazon Web Services (AWS) worked with SRO Motorsports to create a solution that connects professional drivers around the world at home to a simulated race using Assetto Corsa Competizione, the official GT World Challenge video game, and then broadcast that race across the globe. While races are virtual, the competition between drivers is real. This drove huge viewership numbers for the GT Rivals Sim Racing League and gave race fans and drivers a chance to experience the thrill of Motorsports without any physical interaction. 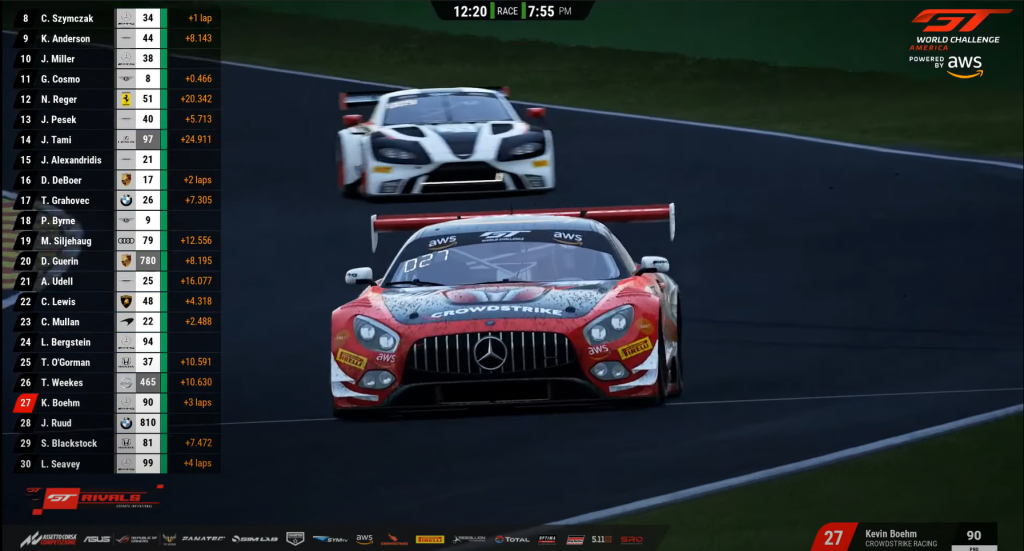 Yes, this is a video game! Kevin Bohem, racing driver, in the #90 CrowdStrike Racing Mercedes-AMG GT3 at Spa Francorchamps.

How do pro drivers compete with each other?

With social distancing and lockdowns in effect in many countries, professional drivers are dispersed around the globe. The challenge was to bring drivers together in a virtual racing world. SRO Motorsports launched competition servers using Amazon Elastic Compute Cloud (Amazon EC2). Using AWS Regions, SRO placed servers close to drivers located across the world, allowing each driver to seamlessly connect their simulators to the SRO platform with exceptionally low latency. Because the public internet was unstable during this time, AWS Global Accelerator was used to provide the closest possible endpoint for quick ingress to the AWS network. This created the virtual world and seamless interaction among drivers.

How do you produce a virtual race when everyone is at home?

To produce a professional race, even a virtual one, you need directors and commentators. To solve for this, SRO ran a home broadcast using the in-game Director Mode to adjust cameras, highlight drivers, and focus on battles. Commentators were needed for these races as well. Discord was used for audio drop-ins from the teams. Once the talent was in place, a 1080p 60FPS feed using Open Broadcaster Software over RTMP streamed to the closest AWS Region using AWS Elemental MediaLive for real-time video encoding. Using the flexibility of MediaLive, SRO duplicated the single RTMP stream into redundant streams feeding its social media accounts (Facebook, Twitter, Twitch, and YouTube Live).

Tell me more about how you get video from one region to the entire world?

Since sports car racing is hugely popular all over the world, feeds needed to be distributed across continents. With public internet traffic stressed to a breaking point, particularly in hard-hit European markets, SRO used AWS Elemental MediaConnect and the AWS backbone as a reliable transport stream. This resulted in an uninterrupted event broadcast despite shaky local internet across Europe. MediaConnect also allowed SRO to reliably and securely move content between regions and stand up another MediaLive channel in Europe to feed RTMP streams to existing systems, ensuring a seamless hand off with existing equipment.

Because of the popularity of the racing events, and a lack of content globally, SRO had an opportunity to expand the series to markets around the world. SRO was able to go global in minutes by creating new MediaConnect flows to distribute content to broadcasters on multiple continents. This included delivering feeds to 100+ countries with viewers in Europe, Africa, North America, Asia, and Australia. Using AWS Media Services, SRO was able to quickly stream more than 26 hours (and counting!) of high-quality reliable streams reaching millions around the world.

“As we looked at the current landscape of the Motorsports industry, we quickly identified the need to expand our sim racing Esports offerings to North America to offer our racers and fans another form of racing entertainment,” said SRO Motorsports America president and CEO Greg Gill. “Leveraging our relationship with Assetto Corsa Competizione and our experience producing Esports in Europe, we were able to develop an exciting Esports series – GT Rivals.”

“Together with AWS, we identified key solutions that would provide us the power to quickly scale the execution of GT Rivals. Utilizing AWS Media services, we’ve been able to deliver a high quality and reliable production to bring sim racing into the devices of our fans around the world. Showcasing GT racing across multiple live stream platforms where they like to consume content the most.” 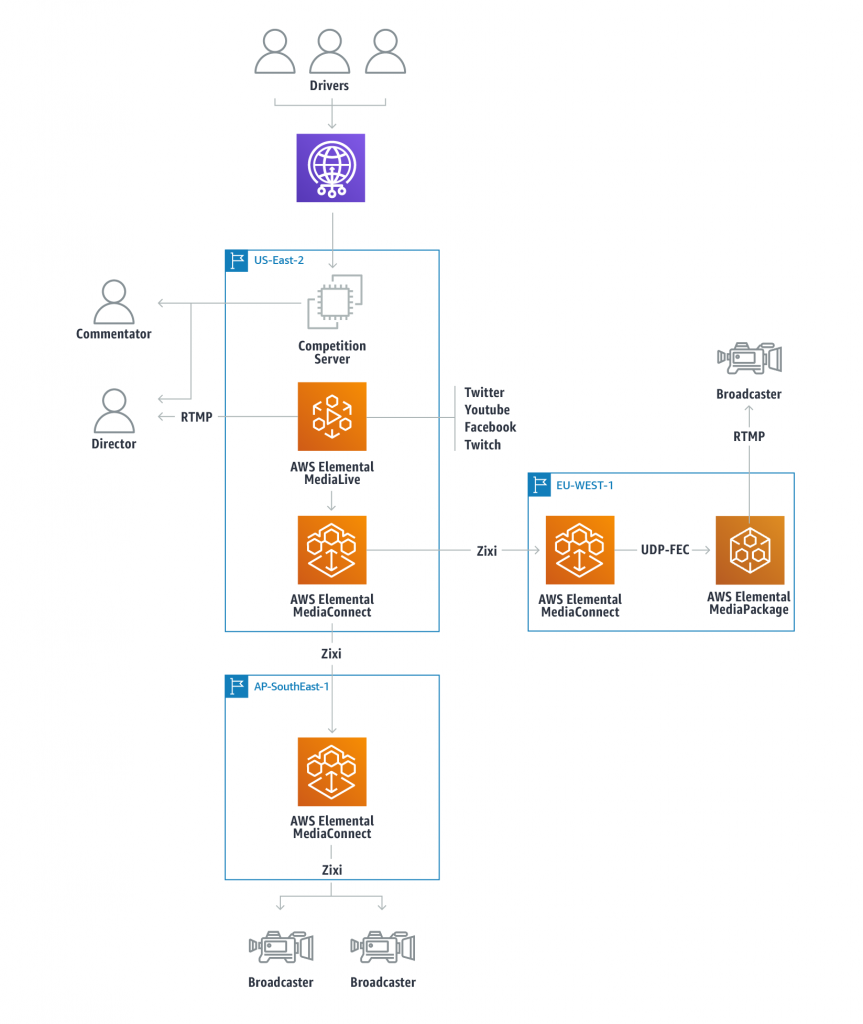 SRO was able to get its virtual events up and running in less than a week. The speed and agility provided to them by AWS was key in delivering this content to its fans, reaching more than 5.5 million viewers during live streams. During a time when not much is normal, SRO was able to bring racing fans the next best thing to being in the stands.

In this Post we described how SRO Motorsports quickly stood up and scaled its broadcast operation using AWS Media services. If you would like to learn more about MediaLive or other AWS solutions for media, take a look at our solutions page. There you can launch vetted technology solutions for media streaming and more.